The desalination plant, with all the reverse osmosis desalination technology installed inside a standard 40-foot container, guarantees a production of 840 m3/d of water for agriculture.

The use of water and its management is essential for increasing agriculture and securing production. This is a compelling reason that justifies the constant search for solutions for the supply of water for agricultural use, especially in arid and dry areas where average annual rainfall is very low.

This is the case, for example, in Almeria. One of the most drought-stricken provinces in the country, Almeria frequently experiences critical situations.

Guaranteeing a water supply for agriculture in Almeria is essential if the economic livelihood of thousands of farm workers is not to be jeopardised. We must not forget that this is the “market garden of Europe”, the largest vegetable exporting province in Spain.

Since summers are rainless and the dry season lasts for more than six months, desalination has become a great ally for irrigating Almeria’s fields.

One of the most outstanding applications of the reverse osmosis desalination sector is the treatment of salt water for irrigation of agricultural crops.

Desalination reduces one of the biggest uncertainties for farmers, the availability of water for irrigation regardless of weather variations. It guarantees the water supply for crops at all times and today, thanks to innovations in reverse osmosis equipment, it can supply any volume of water demand.

Thanks to reverse osmosis, harmful components for crop irrigation are removed from salt water. A process that applies pressure to a salt water solution and passes it through semi-permeable membranes that allow pure water to pass through, but not the dissolved salts.

Containerised desalination plant for agricultural use

A containerised desalination plant for irrigation is a fast and effective solution for agriculture. With all the reverse osmosis desalination technology installed inside a container, it is possible to transport them wherever they are needed.

Specifically, it is a reverse osmosis water treatment unit for a production of 840 m3/d of water for crop irrigation.

DThis installation is equipped with an electrical and control panel, with PLC, variable speed drive for the high speed pump and touch screen. With a system capable of generating lists of various operating parameters through a port located on the touch screen and through connection to a Scada. In addition to the possibility of establishing a monitoring system from the SETAᴾᴴᵀ facilities.

This containerised desalination plant is made up of:

All these elements are installed inside a standard 40-foot container, duly conditioned, from where the unit is operated.

This containerised desalination plant for agricultural irrigation, built in just two months, also highlights how these reverse osmosis desalination systems make it possible to reduce the conductivity of the water from 3410 µS/cm to a level below 150 µS/cm, allowing the salinity of the product water to be adjusted to the desired level by means of a mixing system.. 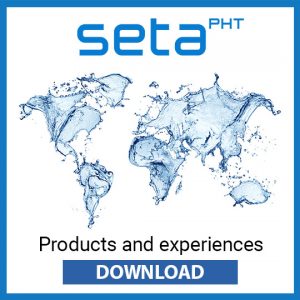 The project covers the design, manufacture, testing, assembly supervision and commissioning of a reverse osmosis system for the reduction of salinity of an effluent with a treatment capacity of 15,000 m3/day.

The project consists of the supply of a water treatment plant with a flow rate of 2×264 M3/D for the El Sauz II Combined Cycle Power Plant (CCC El Sauz II) in the state of Querétaro, Mexico.

SETAᴾᴴᵀ launches its new corporate identity, a commitment to an innovative and modern design, which replaces the previous one in its entirety. 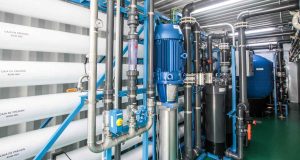 The project consists of the design, manufacture and supply of a brackish water treatment unit by reverse osmosis with a capacity of 35 m3/h of water for irrigation of crop fields in Almería.

We help you in choosing the ideal solution for water treatment, whether for human or industrial consumption.